Manchester has a long history when it comes to inventing things. The computer, graphite, commercial railways, indie music, football…the list goes on and on. One of our food and drink gifts to the world has been Vimto.

If you’ve never tried it, Vimto is a fruit-flavoured soft drink with true cult status. It contains grapes, berries and blackcurrants (and also, admittedly, lots of sugar).

In the UK we have a similar drink called Ribena. If you speak to anyone from Manchester you’ll realise that we are If Ribena is the UK’s most iconic berry flavoured drink, Vimto is the stylish person’s alternative choice.

Preferred in Manchester to just about any other soft drink, Vimto’s reputation across the rest of the UK tends to be defined by people who haven’t tried Vimto, and people who love Vimto and champion it at every opportunity!

A History of Vimto

At the start of the 20th century, a man called John Nichols used to sell herbs, spices and medicines in Manchester. He developed the recipe for what he called Vim Tonic. It was originally a medicinal drink but came to be regarded as a soft drink in 1913 and with that, the name was shortened to Vimto.

Due to the popular temperance movement of the period, which encouraged people to lead teetotal lifestyles, soft drinks were all the rage. And Vimto successfully made a name for itself within this culture.

It wasn’t, though, until the 1990s that Vimto really established itself as the trendy person’s booze-free tipple of choice. British culture in the 90s was defined by a slightly unruly, anti-establishment attitude. With Brit Pop acts like Blur, Pulp, and Oasis (yes, another Manchester export!) at the top of the charts, and anarchical TV shows like TFI Friday and The Word being watched by millions, anything too middle-of-the-road was, well, a bit naff.

Well, the marketing guys at Vimto had their finger on the pulse because the brand enlisted the perfect representative to advertise their brand: the slightly rude cartoon poet, Purple Ronnie. Created by writer and illustrator Giles Andreae, Purple Ronnie became a rogueish, much-loved figure on British TV, famous for his love of partying and innuendo-laden poems. One of his rhymes went as follows:

Vimto is a smashing drink
So why not have a slurp?
It’s full of fizzy bubbles
To make your bottom burp

In 2003, Purple Ronnie walked off into the sunset and Vimto adopted the new slogan “Shlurpling the Purple”.

Vimto in the Middle East, and Around the World

Over the years the popularity of Vimto has gone from the Manchester streets to all around the world. An interesting tale relates to the Middle East and the Arabian Peninsula. During Ramadan, the drink becomes incredibly popular. This is probably due to the high sugar count helping people through their daily fasts. The Arabian Peninsula is the biggest foreign market and sales boom during the holy month, with the drink being the biggest selling beverage in certain countries.

Vimto’s popularity in this part of the world stretches back an impressive 80 years, and that popularity only seems to be growing.

Variations of the Drink

The good people at Vimto have never rested on their laurels, and throughout the drink’s history, many different varieties have been introduced. The standard Vimto is sold in both pre-mixed carbonated and cordial versions, with the latter being the more popular choice. In the winter months, the cordial version is often added to hot water to create a sweet, warming drink.

Through the decades Vimto has also released jelly babies, ice lollies, and other sweets featuring the distinctive brand flavour. And the drinks range often makes room for limited edition guest flavours, such as Cherry Vimto and Strawberry Vimto.

For those who haven’t been inspired by Vimto’s early temperance movement origins, you can use the drink as an inspiration and make a pretty moreish cocktail known as a Cheeky Vimto. Although the cocktail doesn’t feature actual Vimto as an ingredient, the blending of port wine and Blue WKD creates an alcoholic drink that captures something of Vimto’s unique berry blast.

Finally, if it’s sunny out, you may want to toss Vimto into a blender with ice cream and milk to create an indulgent Vimto milkshake.

Anyone wanting to explore the culture surrounding Vimto in Manchester today should head to Granby Row in Manchester city centre where they’ll find a massive wooden sculpture of a Vimto bottle. This massive tribute to a Manchester classic is always a popular stop on our food tours of Manchester.

Would you like to learn more about Manchester and its incredible food scene? Are you looking for the best things to do in Manchester? If so, book a food tour with us and let us show you our city!

If you have any questions or comments regarding our tours, please get in touch. 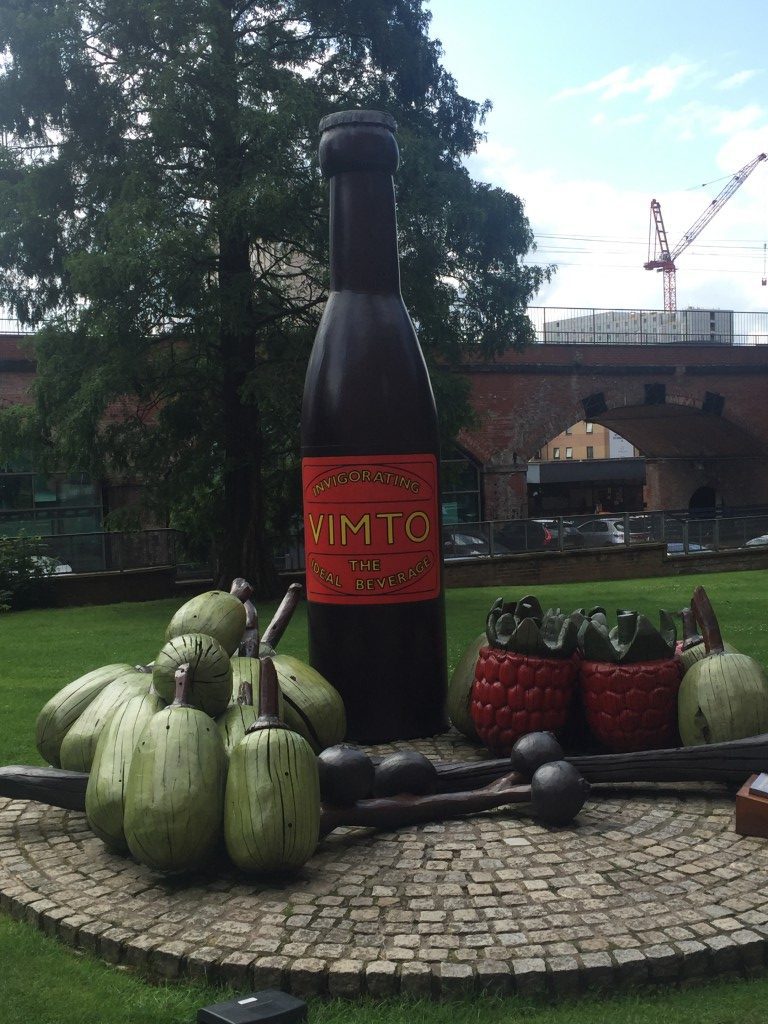