A Manchester Food Tour in the Northern Quarter

Manchester’s Northern Quarter sits in the middle of Piccadilly and Ancoats. In recent years it has become the city’s trendiest area. A wealth of bars and restaurants have taken over. What was once a forgotten part of Manchester is now a must-visit.

As you explore this historic district, a sense of tradition and community spirit is always there.

If you’re interested in getting to know this area for yourself, why not join Manchester Bites for our Canals to Canapes Walking Food Tour in the Northern Quarter?

The Story of Manchester’s Northern Quarter

As with so many stories from Manchester’s past, we must begin with the Industrial Revolution, which was spearheaded in Manchester.  The city’s first cotton mill was opened in 1783 in what would later become known as the Northern Quarter.

By 1853 this area had 108 mills and was a major hub of activity – the area was right bang in the centre of the industrialisation of Britain, a process that would, in time, affect the entire world.

People lived within very close proximity to each other. Freidrich Engels painted a bleak picture of the area, describing it as “dirty, old and tumble-down” in his work The condition of the working class in England. But for all its squalor, the area was hugely significant.

Manchester at this time was the engine room of the British Empire, and it was the working people of Manchester and similar industrial towns that kept everything in motion.

During Victorian times, the area became a popular entertainment spot. Tib Street was famous for its pet shops, and people would stroll up and down the road looking at all the animals on display.

The shops of the Northern Quarter would stay open late into the night, and with time the area came to be regarded as a bohemian centre.

In this cultural landscape, the Northern Quarter also gained a reputation for being a hotbed of political activity.

Manchester has long had a reputation for fighting for social justice and the Northern Quarter was the perfect place for preachers, workers, and political activists to make speeches to sympathetic (and occasionally hostile) crowds.

We strongly recommend checking out the People’s History Museum for anyone interested in Manchester’s political history.

The Decline Of The Northern Quarter

It was in the 90’s that the council devised the name Northern Quarter. Creative industries were encouraged to the In the wake of the senseless destruction of WWI, many of Manchester’s industries started to collapse.

Then after WW2, Manchester’s priorities had to be concentrated on rebuilding parts of the town destroyed by bombing and the Northern Quarter was largely neglected.

For much of the 20th century, the area’s story was economic decline. The factories and shops were closed to be replaced by cheap housing. And yet, the rough-and-ready charm of the place was what would eventually guarantee its revival and renovation.

In the 1990s, the Manchester music scene brought newfound attention to many of the neighbourhoods in Manchester that needed some love. And none benefited quite like the Northern Quarter. Suddenly the area was brimful with clubs, trendy boutiques, record shops, and cheap cafes.

The multicultural nature of the area would also lead to the opening of several restaurants specialising in international foods, such as the legendary This & That Cafe, which does some of the best curries in the whole city to this very day.

What Makes The Northern Quarter So Good For A Food Tour?

In the 90s, the local council devised the name Northern Quarter. Creative industries were encouraged to the area. Design businesses, architects, and start-ups made the Northern Quarter their home. The district recaptured some of that bohemian charm that had defined it during the Victorian period.

With such industries came great cafes and restaurants. What had been a quiet, forgotten part of Manchester was re-born.

The Northern quarter now has a plethora of food businesses to choose from. Asian, American, African, or old-fashioned, no-frills British food is all within a short stroll, and much more besides.

The buildings have been relatively untouched since the 18th century. So much so that the Northern Quarter is often used as the backdrop for films and tv series.

When you walk the streets of the Northern Quarter, you really get a sense of Manchester’s distinctive character; the architecture, eateries, cultural spaces, and, most importantly, people provide continuity, a connection to the area’s earliest days.

This mixture of the old and new makes the Northern Quarter the perfect place to enjoy an unforgettable Manchester food tour.

If you have any questions concerning our tours or services, please feel free to get in touch. 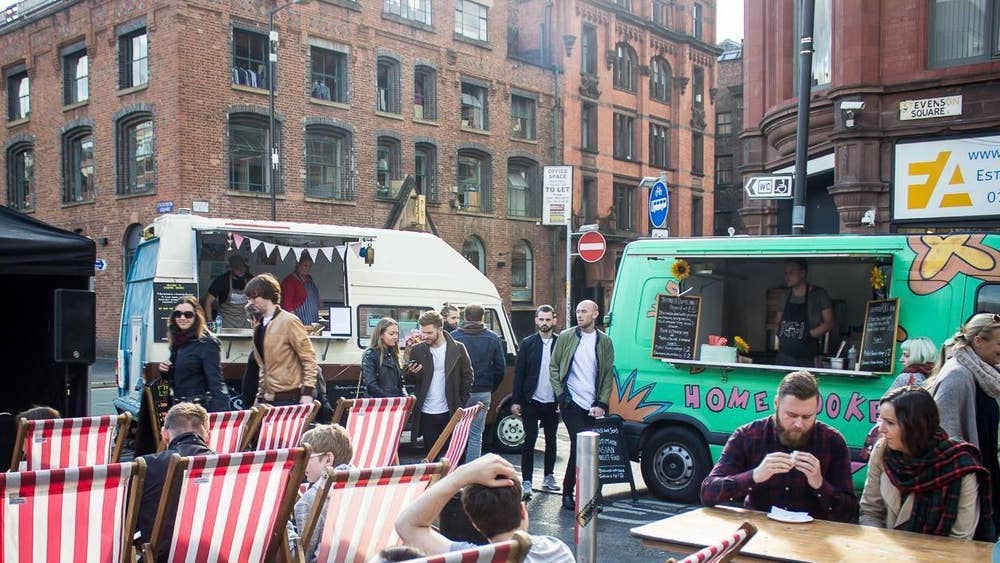