A lot of guests on our Manchester food tours ask us what are the most famous foods from Manchester? What is the typical cuisine of the region?

Well, given Manchester’s famously – or, perhaps, infamously – drizzly weather, it should come as no surprise that we enjoy warming, hearty dishes.

Rich Bury Black Puddings are served at breakfast. Eccles Cakes make a fine accompaniment to a hot cup of tea. And an indulgent Manchester Egg is just the thing after a couple of pints!

But perhaps most beloved of all is the Lancashire Hotpot. This irresistible dish is so simple to prepare and makes a perfect choice on a cold night.

The History Of The Lancashire Hotpot

First, the name. Though Manchester today has its own council area, the city has historically formed part of the county of Lancashire. A fact witnessed in the city’s sports, with Lancashire Cricket Club playing their home games just south of the city.

Hotpot is cloaked in a little more mystery. Does it refer to the pot or the style of food being prepared? The famous 1861 cookbook Mrs Beetons Cookery Book contains a recipe for a simple stew called ‘Hotch Potch’ and it’s likely that hotpot similarly refers to any straightforward stew that can be cooked in a single pot.

The Lancashire Hotpot, like so many Manchester traditions, is bound to the city’s history of work. Before industrialisation, many families would work at home spinning thread. A meal that could be left to slow-cook above a fire was most convenient.

Following industrialisation, this characteristic of the Lancashire Hotpot became even more important. A workforce was now leaving home for several hours at a time. The hotpot was a perfect meal as you could leave it on low heat to cook while you were out.

Hungry workers would race home at the end of a shift and find a hearty dinner awaiting them. Presumably, their home was also filled with the pleasing aroma of the stew.

Learn more about the city’s starring role in Britain’s Industrial Revolution with our From Canals To Canapés Manchester Food Tour.

So What Is A Lancashire Hotpot?

Well, three ingredients are essential for the Lancashire Hotpot: lamb, onions, and potato. Lamb refers to the meat of a young sheep, though mutton (cheaper cuts from older sheep) was traditionally used.

The lamb is slowly stewed along with onions, stock, and some flour to thicken. Thinly sliced potatoes are placed on top to act as a lid, sealing in the meat and veg. The dish is then cooked in the oven for an hour or so until ready.

Couldn’t be any simpler! Although you will today find plenty of variation from the original three-ingredient recipe.

Carrots are often added to the stew, as are leeks and turnips. Historically, lamb’s kidneys would also be added, though this is less common today.

The topping is also sometimes varied, with a pastry lid added instead of potatoes.

One notable absence from contemporary recipes is oysters. In early versions of the hotpot, oysters regularly formed part of the mix. By the 18th and 19th centuries in England, oysters were hugely popular and were added to all kinds of recipes.

During the 19th century, in particular, oysters were the affordable street food of choice (in the year 1864, over 700 million oysters were consumed in London alone). But due to over-fishing, oysters became the high-end delicacy we know today.

If you like seafood, check out our blog on where to buy the best fresh fish in Manchester.

The Perfect Dish for a Cold Manchester Day

So, why do we love our Lancashire Hotpot so much in Manchester?

Its simplicity means that a delicious Lancashire Hotpot can be made on a budget. This was a dish for working people and you won’t need to break the bank to buy enough ingredients for a generous serving.

You don’t need to have a wealth of cooking knowledge to prepare the dish, and, once in the oven, you’re free to relax and get on with other things. You’ll also get plenty of nourishment from a Lancashire Hotpot.

In an era in which we’re repeatedly encouraged to reduce the number of processed foods in our diets, here’s a meal that’s packed with nutritional value and made only of a few fresh ingredients.

But perhaps more than anything, we love Lancashire Hotpot because of its place in the story of our city. It’s been a staple of the Mancunian diet for a long time!

Travel through the city and you’ll find pub after pub serving hotpots on their menus. If you find yourself caught up in one of our rain showers, take the opportunity to find the nearest pub and order a restorative portion of Lancashire Hotpot.

The Best Place in Manchester to Eat Lancashire Hotpot

If you want to enjoy a real manchester experience you should try Annies on Old Bank Street. It’s our top choice for ordering a Lancashire Hotpot when in Manchester.

Owned by Jennie McAlpine, a star of the legendary Manchester soap opera Coronation Street, Annies offers a cosy setting and an array of classic British food.

In addition to an out-of-this-world hotpot, head chef Richard Moore includes many other local specialities on his menu, from sausage & mash to Bury Black Pudding, and steak & ale pie.

How to Prepare a Lancashire Hotpot at Home

Decided to spend a night in, or just love the thrill of cooking new dishes? Preparing a Lancashire Hotpot at home is low on effort, big on reward.

You have a wealth of recipes to choose from with almost every British celebrity chef having given their own version of the Lancashire Hotpot.

Excellent traditional takes on the stew can be found over on Kitchen Sanctuary or at BBC Good Food. And The Guardian’s (another Manchester institution) How to Cook the Perfect Lancashire Hotpot makes for great reading.

And if you like testing the recipes of the famous tv chefs, you can find Jamie Oliver’s take on a lamb hotpot here.

This brings to an end our guide to the Lancashire Hotpot, but sign up for our newsletter below and we’ll keep you updated with our latest foodie news.

If you have any questions for us about this blog or any of our foodie walking tours of Manchester, get in touch.

This post was originally written in June 2020 and updated in March 2022. 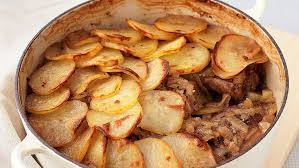