The Arndale Shopping Centre. Love it or hate it?

Manchester’s Arndale centre is a marmite building. You either love it or hate it. I think most of us hate it but have at least some fond memories of how it was when we were younger.

It was built in phases between 1972 and 1979. At the official opening the Mayor of manchester, Dame Kathleen Olerenshaw said disappointingly, “I didn’t think it would look like that.”

During the 80’s a retail company called Arndale owned quite a few shopping centres around the UK. This was the biggest. In 1996 the IRA bomb was detonated right under the bridge that connected the Arndale to Marks and Spencers. Following this the centre was refurbished to look more like it does today.

Interestingly enough, in the 1970’s there was a plan to build an underground railway station in the Arndale. The council had a plan to link Piccadilly and Victoria train stations via an underground line. Nothing ever came of this and today we have the metrolink.

It’s not all bad, the food market is even on our food tour.

Manchester has an out of town shopping centre called The Trafford Centre. The Arndale however is still the busiest of the two.

We visit the Arndale centre on our food tour. In fact the best part of the Arndale is on our food tour. The food market is at the High street entrance, next to Shudehill. This is still a hidden gem in the heart of the city. When we were doing our food tour research we asked a lot of people if they knew this market existed. Suprisingly, a lot of local mancunians had no idea of its existence. Another great reason to take a food tour.

If you’d like to learn more about Manchester and especially the food scene, book a food tour with us. www.manchesterbites.com

For more information about Manchester’s food scene follow our blog at www.manchesterbites.com/blog 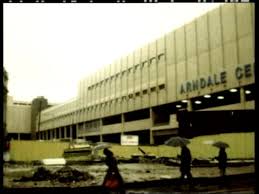