Castlefield: What To Do In Manchester’s Canal Basin

A great place to go on a Manchester summer afternoon is Castlefield. Situated at the southern end of Deansgate, Castlefield is a great spot for a few drinks and some lunch. The area sits in the city’s historic canal basin where converted warehouses are now home to apartments, restaurants and bars.

As local travel experts based here in Manchester, we’re always keen for visitors to explore more of this fascinating, diverse city. That’s why we lead food tours in Manchester! We love to show off the incredible variety of cuisines and cultures that make up the heart of the city.

If you’re looking for local things to do in Manchester and wanting to explore more of the real city, we’d love to show you around. For now, learn a bit more about the Castlefield area. Then you can plan your trip to Manchester and feel like a local.

A History Of Castlefield

Castlefield was the centrepoint of Manchester’s earliest beginnings. A Roman fort was built here around 79AD and from this springs the city we know and love today. The name Castlefield itself represents the fort (castle) which was then surrounded by farmland (i.e. the field).

We’ve already explained what the people of Manchester are called, but it’s these very Roman origins that give us the word we still use today for a person from Manchester: Mancunian.

Walking down Liverpool Road, you can see the ruins of Mamucium (the Roman name for Manchester) opposite the Science and Industry Museum. But ancient Roman ties isn’t the only historically significant part of the area’s story; in fact, Castlefield has remained at the heart of Manchester across the centuries.

A village developed and flourished in the area throughout the middle ages. Then, during the Industrial Revolution, the Bridgewater Canal, the world’s first industrial canal, arrived in Castlefield. This area was the at very epicentre of the industrialisation of Britain, a process of change that would have a global impact.

Liverpool Road was also the site of the world’s first passenger train service. In the 1830s, the route between Manchester and Liverpool opened here.

Sadly, after the boom years of the Industrial Revolution, Castlefield was to endure a period of neglect. The old warehouses and canals were left to ruin.

It wasn’t until the late 1980s that life started to be breathed back into the area. Enterprising developers began to buy land around the canal basin. Soon, the old warehouses were turning into trendy flats and bars. The canals were cleaned up, and now it is common to see fish, ducks and other wildlife enjoying them.

Things to Do in Castlefield Today

Castlefield is a hive of activity these days. The area around Liverpool Road is where you’ll find the Science and Industry Museum and the old Roman Fort. We included the museum in our list of the best places to visit in Manchester, but there are loads more recommendations there for you to enjoy!

There is also a great bar near Castlefield called Cask, which has a fantastic array of craft beers to enjoy. Further towards the canal, you’ll find the Castlefield Bowl. This outdoor arena has a capacity of 8,500 and is excellent for live music.

Around the canal itself, there is a bar called Dukes 92. The name comes from the bar being housed in a converted warehouse next to the 92nd lock on the Bridgewater Canal. During the summer months, the huge outdoor space is full of Mancunians soaking in the sun with a few cold beers.

When visiting Manchester, take a walk around the basin in Castlefield. There, you’ll be sure to find some great photo opportunities and excellent people-watching.

How to Get to Castlefield in Manchester

Castlefield is straightforward to find once you’re in Manchester. You can get the tram to the Deansgate – Castlefield stop and then make the 1-minute walk to get there.

It doesn’t get much more convenient than that!

If you’d like to explore Manchester in a unique way, come and join one of our food tours at Manchester Bites. We love to tell the tales of the communities that built this great city. And, of course, we taste some of our favourite dishes along the way. If you have any questions about our tours or about Manchester, feel free to get in touch!

This article was originally written in August 2020 and updated in February 2022. 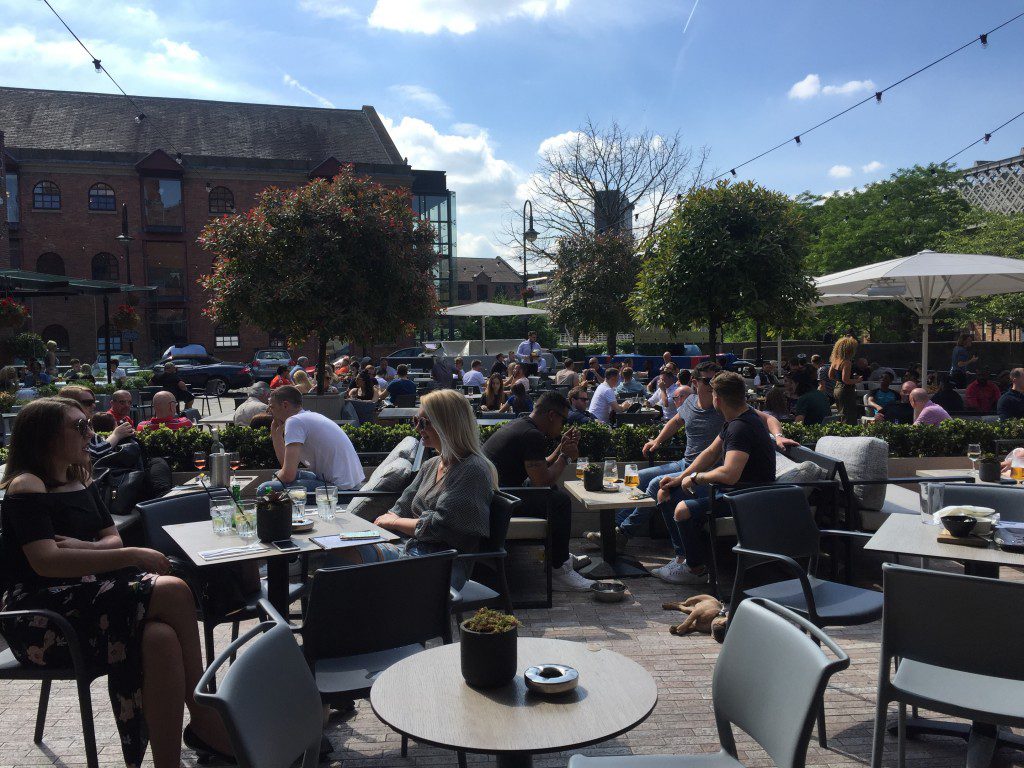