One of the most well known buildings in Manchester city centre is the Midland Hotel. Opened in 1903 the hotel was built by the Midland railway company. In those days the major train station in Manchester was Central station. Central was right behind the Midland hotel. We now know it as Manchester Central Convention Complex. The hotel was built to house passengers of the service who had come to Manchester from all over the country. The building was designed by architect Charles Grubshaw. It is Edwardian Baroque in style and cost more than a million pounds to complete.

Famous stories of the Midland Hotel.

As well as being one of Manchester’s finest hotels the Midland is know for a few other reasons.
During world war two the area around the hotel was spared heavy bombing by the Luftwaffe. It is believed that Adolf Hitler was a big fan of the Midland. He allegedly wanted to use it as his base in the UK when he successfully invaded.
The hotel is also the place where Mr Charles Rolls first met Mr Henry Royce. The two later started up Rolls Royce which is still going strong today.

Another famous tale of the hotel involves their flagship restaurant The French. Known for decades as one of Manchester’s best restaurants, the doorman of The French once denied access to the Beatles for being inappropriately dressed. One of our tour guides believes that this was also because they were from Liverpool.

Can I visit without being a guest?

You can walk into the lobby area of the hotel to take a look. There are two great places to eat here. The French which we have already mentioned. This was Manchester’s first michelin starred restaurant. The award was given back in 1974. SInce then the restaurant closed down and re-opened in 2013. Adam Reid is now the chef patron there. He uses seasonal, local ingredients and has been drawing in the crowds every night.
For a more down to earth bite the Mount street Dining room and bar promises to serve local classics with a twist. Coming soon.

If you would like to explore Manchester in a unique way, book a food tour with us. Our small group tours take you off the beaten path as we visit some of our favourite food haunts. www.manchesterbites.com 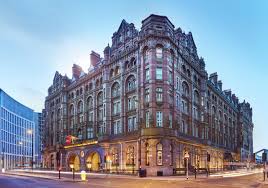