What exactly is a Manchester tart?

You have to be careful who you ask this question to. We are talking the food sense here so don’t get any ideas.

A Manchester tart is a traditional English baked tart. There is the normal shortcrust pastry with a filling of jam and custard. On the top is grated coconut and some Maraschino cherry. You might also find some banana sliced under the custard. It can be a bone of contention the banana. Many people believe that a proper Manchester tart should have nothing to do with bananas.

Robinson’s bakers in Failsworth near Oldham are the original bakers of the tart. It was first recorded in Victorian times.

The Manchester tart is even loved down south.

Another interesting fact about the Manchester tart occurred in world war 2.  During that time it was one of the top 5 foods of children in the East End of London. We like to do our bit to help those less fortunate than ourselves.

Manchester tarts used to be a staple of school dinners back in the 70’s and 80’s. Sadly, those of us who suffered Manchester council’s school dinner offerings have differing views as to their taste. It’s fair to say that the Manchester tart you’d buy in many of our bakeries today is a much better version than those we were offered.

One such bakery is The Manchester Tart company. Based just south of the city in Whalley Range The Manchester Tart company is a mother daughter team. They like to create local recipes and specialise in tarts and pastries. We always like to give a shout out to smaller, local food businesses. You can take a look here www.themanchestertartcompany.co.uk

If you’d like to learn more about Manchester and especially the food scene, book a food tour with us. www.manchesterbites.com

We promise we won’t make you eat the school dinners version. 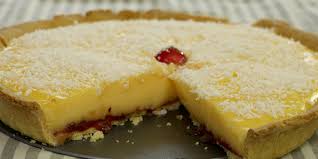