We are lucky to have numerous historical buildings in Manchester city centre. One such building that you can visit is Manchester’s Free Trade Hall. Built in 1856 this grade 2 listed building stands on the site of the Peterloo Massacre. Originally the building was used as a meeting place for the local business community.

It had a vital role in the repealing of the corn laws. The corn laws meant that imports of grain, corn and wheat were taxed. This meant that landowners in Britain could charge a higher price for their corn. As a result it became more expensive to eat. Over time many urban centres such as Manchester rose up and rebelled against the law. The Free Trade Hall was Manchester’s epicentre for anti corn law demonstrations.

Fast forward to December 1940. Manchester was under attack from the German Luftwaffe. The Free Trade Hall suffered great damage. Only the frame of the building survived. In the 1950’s the hall was re-built behind the original outer wall.

A centre of Manchester’s music scene.

The Free Trade Hall became home to Manchester’s Halle Orchestra. In fact it continued to be their home right up until 1996. That is when the Bridgewater Hall took over. It wasn’t just classical concerts that the hall held. One of the most famous episodes in the hall’s history came in 1966.

Bob Dylan was touring the UK and at the time was causing quite some controversy. Dylan was using an electric guitar which was seen by many of his fans as distasteful. At a gig in the Free Trade Hall on 16th May, Dylan was heckled and called “Judas” by a concert goer. Many fans started to slow clap and some even walked out. Dylan kept going. He knew what he was doing was changing the face of music at the time. In 1998 Dylan released the recording of the gig. Manchester bands such as The Fall, The Smiths and Joy Division all say they were heavily influenced by this event.

Today the Free Trade Hall is a Radisson Hotel. You can still go in and admire the stunning entrance hall and enjoy a drink at the bar.

If you are interested to know more about Manchester and it’s incredible history, book a tour with us. Our food tours take in some of Manchester’s best local bites as well as a wealth of history and culture. To book a tour go to www.manchesterbites.com 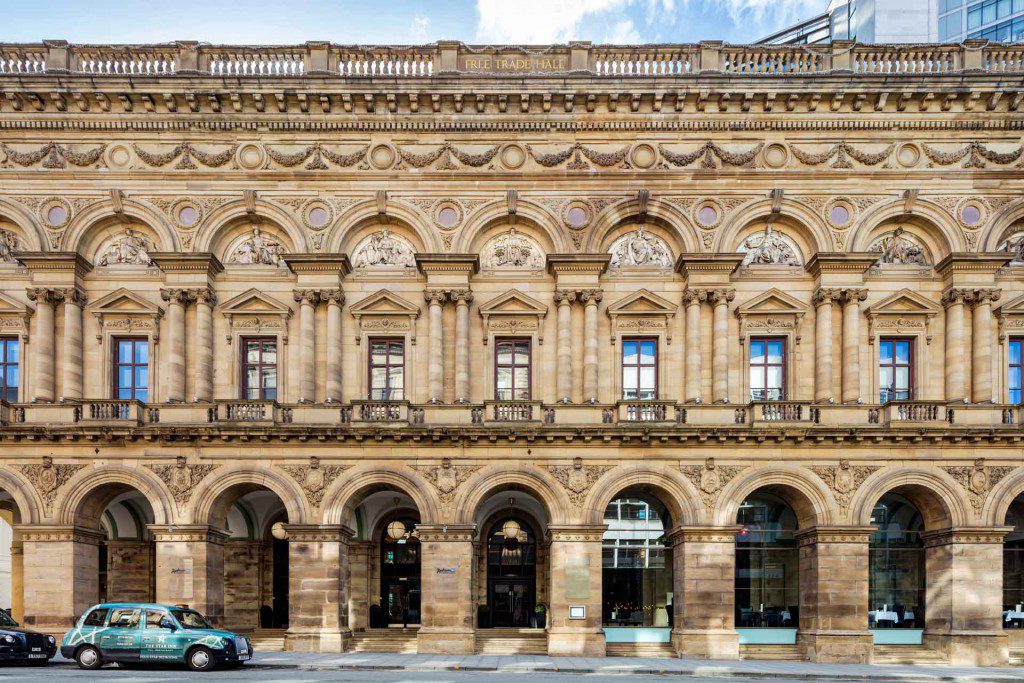