Altrincham Market House: Things to Do in Manchester

The revival of the Altrincham Market is nothing short of remarkable. From 1290 (yes, 1290!) the market had been at the centre of community life in Altrincham. Throughout the centuries, the market would have been where townsfolk gathered to buy goods, make a living, and spend time in the company of their neighbours.

And yet, the second half of the 20th century brought a period of stagnation. With the fortunes of the town on the downturn and the population size decreasing year over year, the historic market was being run by the council with little love or care. In fact, around a decade ago, Altrincham was voted as having the worse high street in Britain.

So, what has changed?

Well, Nick Johnson came onto the scene. Nick was a property developer and saw something in Altrincham that others failed to spot. In 2013, he won the contract to run the market and quickly set about changing the face of it and in turn Altrincham.

Listen to Nick’s fascinating account of how he came to the project in the excellent documentary below.

Nick gave the Victorian building a makeover. Cleaning it from top to bottom and restoring some features that had been neglected. He then got to work contacting some of the area’s best, local food vendors.

Nick did the same in Manchester city centre with the Mackie Mayor food hall, the big sister of Altrincham Market House. We previously wrote about Mackie Mayor here.

Since it reopened in 2014, locals and visitors have filled the food hall week after week, and it should come as no surprise – the food on offer is second to none!

Jack in the Box is an award-winning producer of real ale and cider that operate across the Mackie Mayor and Altrincham Market Houe locations. Serving tasty beers from the Blackjack Brewing Co. and other guest breweries, Jack in the Box is the perfect place to catch up with a friend while enjoying a locally-produced brew.

Meanwhile, Honest Crust serves up magnificent sourdough pizzas cooked in a tiled oven imported from Italy. While there is now a wealth of options for great pizza in Manchester, Honest Crust has proved themselves to be stalwarts of the scene. If you fancy eating a perfectly cooked pizza in an atmospheric setting, look no further than Honest Crust at Altrincham Market House.

Looking to eat some traditional northern fare while in the Manchester area? You can’t go wrong with the Great North Pie Co. at the Alty. Having started in a residential kitchen, the Great North Pie Co. has bloomed into one of England’s best producers of pies, having amassed several awards and nominations along the way. Cold day out? There’s no better English comfort food than a serving of pie and mash!

Shops and Events at Altrincham Market

A big part of Altrincham market’s success story is in how the market has really brought a fresh buzz to the town. In fact, Altrincham was recently voted as one of the best places to live in the UK and the market has surely played a part in that.

Throughout the week, you can buy food from local food suppliers, including award-winning butchers, greengrocers, bakers, and fishmongers.

Additionally, there are other regular stalls selling clothes, hand-crafted jewellery, furniture, and much else besides.

Each weekend, Altrincham Market has a different theme, providing locals and visitors alike with plenty of variety throughout the year. Themes include craft and design, vintage, and food (similarly, focused themes apply to the days of the week too) – head to Altrincham Market’s Facebook page for the latest events listings.

Getting to Altrincham Market

Located eight miles outside of Manchester, the Altrincham Market is well connected and easily accessible.

Trains are also fairly regular, with departures taking place each hour from Manchester Piccadilly on the Mid Cheshire line.

Finally, if you are driving, the journey should take no more than 30 minutes.

When is Altrincham Market Open

This brings an end to our short guide on Altrincham Market House. If you have any questions or queries, don’t hesitate to get in touch! 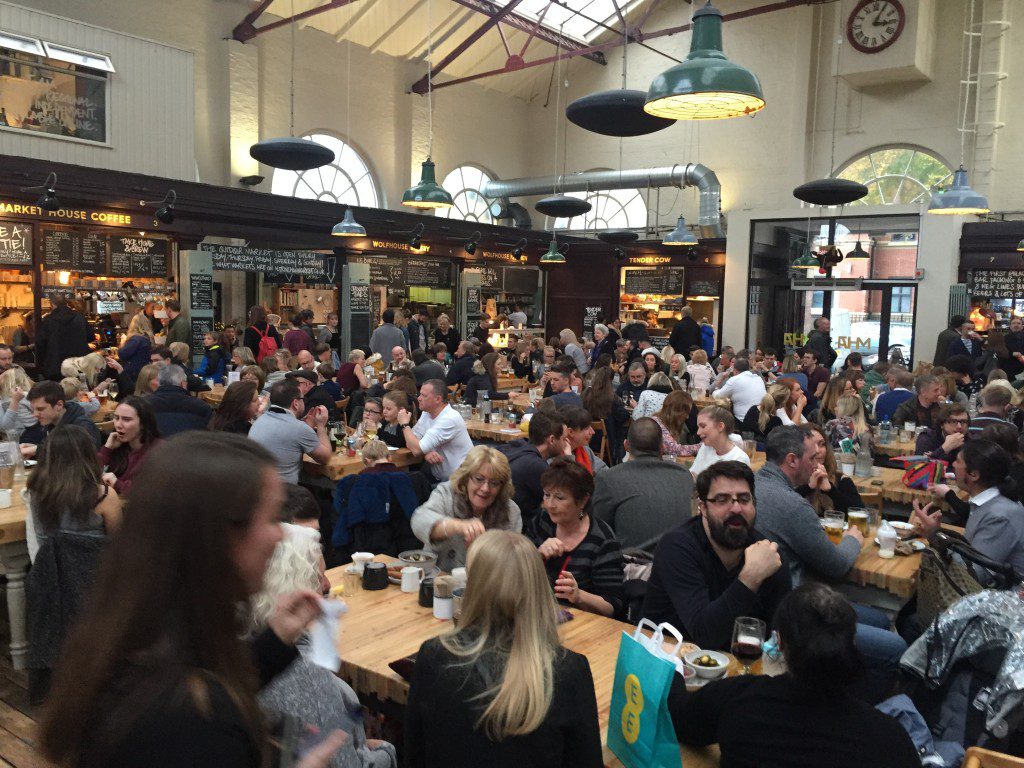